‘This is new India under Rohit, under the pump and this is how they respond 🔥’-Twitter reacts as Rohit Sharma guides India home in the 2nd T20I 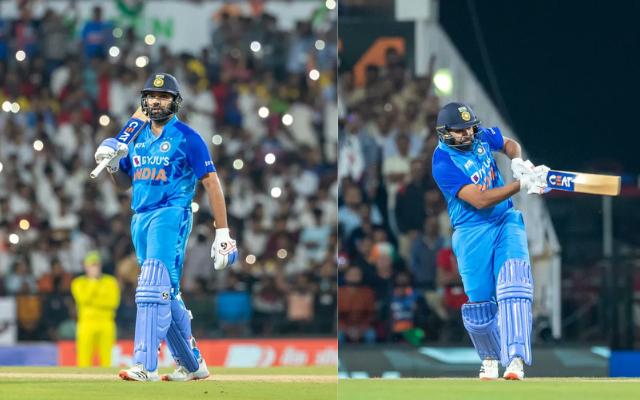 India locked horns with the Australian cricket team in the must-win game at Vidarbha Cricket Association Stadium, Nagpur. The T20I opener between the two teams ended in favour of Aaron Finch and Co.

Australia got the better of India by 4 wickets and took a 1-0 lead in the three-match T20I series. Cameron Green was the pick of the batters for Australia as he scored 61 off 30 balls. He struck 8 boundaries and 4 maximums to his name.

Indian skipper Rohit Sharma won the toss and opted to bowl first in the second T20I against Australia in Nagpur. Australia posted 90/5 in 8 overs. Matthew Wade scored an unbeaten 43 off 20 balls including 4 fours and 3 sixes.

On the other hand, Rohit Sharma who relishes playing the shortest format of the game took the opposition’s bowling attack to the cleaners. He literally tore Australia’s bowling attack with relative ease. Rohit and Rahul got off to a rollicking start to the game by smacking sixes and fours at will.

The duo added 39 runs for the opening wicket before Adam Zampa made a mess of KL Rahul‘s stumps. On the other hand, Rohit Sharma kept going pretty well against the Aussies. He belted the Australian bowlers by playing a fearless brand of cricket.

Rohit Sharma scored a match-winning 46 off 20 balls. The Indian skipper constructed his innings with the help of 4 fours and 4 sixes. Team India chased down the target with 4 balls to spare and levelled the series at 1-1.

Dinesh Karthik hit the winning runs for India in the form of a six followed by a boundary as India beat Australia by 6 wickets. The series decider between India and Australia will be held on September 25, Sunday at Rajiv Gandhi International Stadium, Hyderabad.

Congratulations Team India for victory but credit only to Rohit, Axar and DK… @BCCI need to reconsider about KLol, Chahal and Harsha Patel

He loves playing in Nagpur.

This is new india under Rohit, under the pump and this is how they respond 🔥

I thinks Rohith wants to make some statement had the death bowling issues sorted out India will be a strong contender for WC T20.