‘This is what Dhoni does to people, stabs from back’-Twitter reacts to reports of Ravindra Jadeja leaving CSK next season 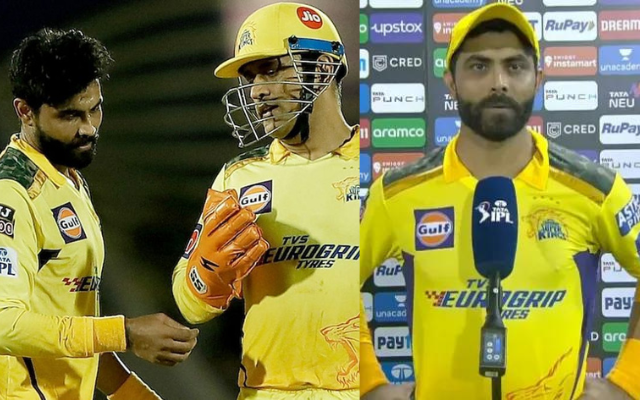 Ravindra Jadeja, a star Indian all-rounder who has been with the Chennai Super Kings since the 2012 season and who has won two titles in the Indian Premier League with them in 2018 and 2021, is reportedly close to ending his association with the team that has won the tournament four times.

The native of Saurashtra was appointed team captain at the beginning of the 2022 campaign, but he stepped down from his position in the middle of the campaign when the squad’s performance was less than satisfactory.

It has been said that since he departed the role, he has had a strained connection with the franchise, although the specific reason why this is the case is still unknown. Jadeja has shown several times, by his actions, that he is upset with the club management; yet, CSK has always maintained the attitude that everything is well between them and the player.

Recent activity on Jadeja’s Instagram account, including the removal of posts relating to CSK, is a strong indicator that this chapter is drawing to a close. And now, a story that was published in the Times of India suggests that his innings could be coming to an end unless something remarkable takes place in the next few months.

Since the Indian Premier League tournament concluded in May, it is common knowledge that the Indian all-rounder has been entirely “out of contact” with the management.

It is common knowledge that CSK operates “like a family,’ and players maintain constant communication with the franchise throughout the year. However, Jadeja has kept the Chennai franchise completely in the dark and has not been a part of any activity that the franchise has been involved in. Jadeja made his return to international cricket for India against England last month after undergoing rehabilitation at the National Cricket Academy.

The all-rounder, who is 33 years old and was stripped of the leadership, is said to feel offended by the decision, and as a result, after being told he could not participate in the tournament due to a rib ailment, he decided to sever all connections with the club.

The disputes have not been resolved since he departed the team’s camp. Because CSK captain Dhoni has already said that he would take part in the 2023 season of the Indian Premier League and will most likely take the helm of the club, it is exceedingly improbable that Jadeja will be prepared to make a comeback at that time.

Ben Stokes or Sam Curran sold to CSK in the auction. With 16cr they can get any one of them easily.

I blame thepla dhobhi for this 😤😠
He finished great all rounder 🤬

As expected!!
He should play for that franchise where he gets respect 🛐 pic.twitter.com/kelxoN8Mqz

Rcb is a loyal franchise

He had it coming, tbh, and many hints directed towards his exit from CSK. Let's see which franchise gets him now.

According to toi jadeja is set to play for delhi capitals..
Shardul thakur might be trade from DC to csk along with one more foreign player ( likely to be rovman Powell)

So we have our most expensive indian player for next year.
I hope he goes in MI,RCB or GT.

Hoping
I know chances are less but still 🥳🥳 pic.twitter.com/0OW8ACHUum