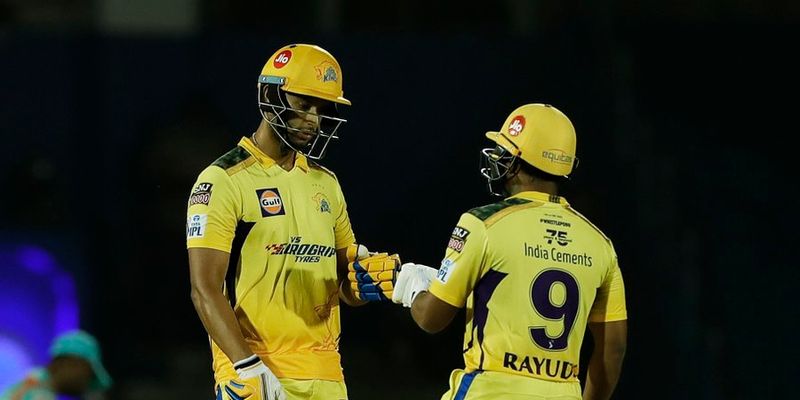 Chennai Super Kings have lost their first three games of the season for the first time in IPL history. They play Sunrisers Hyderabad today, who are also searching for their first win after two straight losses. The bottom of the table clash ensures at least one team will obtain their desperately awaited two points, and defending champions CSK want to walk away with their pride as well as some attempt at their title defence.

CSK’s batting has let them down on two out of three occasions, and their bowling on every occasion. Without their spearhead Deepak Chahar they’ve been found wanting. Faf du Plessis has been missed tremendously at the top of the order, because he provided the perfect foil to Ruturaj Gaikwad – seeing off the hard seaming new ball, keeping the strike rate up and the pressure off Ruturaj. Between their batting collapses and toothless bowling attack, victory has been hard to come by. CSK generally make a habit of backing their players to succeed, but they have never had such a tough start before. They need to be ruthless if they have any intention of progressing in the tournament. Here are three things CSK could try if they’re serious about trying to win.

The former RCB all-rounder is CSK’s leading run-scorer at the moment this season, something that no one, absolutely no one could have predicted. So far, he has 109 runs from three games at a strike rate of 165. He fell for a single digit score in CSK’s first game against KKR, but since then has produced knocks of 49 from 30, and then 57 off 30. Robin Uthappa is close behind with 91 runs at a strike rate of of 157, but worryingly for CSK, the next three on the list – MS Dhoni, Ambati Rayudu and skipper Ravindra Jadeja – have batted at strike rates of 123, 94 and 107. Shivam Dube did well at number 4 for his effortless 49 against Lucknow Super Giants on the heartening occasion that CSK’s batting pulled through to post 210 as a target. It was the only game so far they have managed to produce a score over 131.

Dube was demoted to number 7 again n the game against Punjab Kings where they were chasing 180. Still, thanks to their top-order collapse he ended up batting in the powerplay anyway. Dube entered in the sixth over with CSK at a familiar 23 for 4 after Jadeja was sent back for a duck, and smacked his first ball for four. Dube looked like he was batting on a different pitch from the rest of the CSK batters. Though his lack of footwork could show him up against quality bowlers, Dube just needs to put bat on ball and his raw strength does the rest. With the kind of form he’s in though, it’s doubtful he’ll have any trouble with that.

2. Rajvardhan Hangargekar could debut for CSK

CSK has always relied heavily on their all-rounders, and on their day, the likes of Ravindra Jadeja and Moeen Ali could lay waste to bowlers, and choke batters. They haven’t had too many good days lately. Of course, Moeen has played only one game so far for CSK but many have speculated over whether his 12-crore retention was warranted. In their last game against Punjab Kings, CSK fielded three specialist batters and two specialist bowlers. Aside from wicket-keeper MS Dhoni, that means they fielded five – five – all-rounders, including Dwaine Pretorius who’s already proved he can whack the ball a hard mile. They can certainly afford to make room for young Hangargekar in that lineup.

CSK’s bowling in the second half of Punjab’s innings last much was the lone positive to arise from an otherwise depressing game, and Hangargekar is the kind of player they should be building their future around, as they did with Deepak Chahar back in 2018. Chris Jordan and Mukesh Chowdhury came good as a new-ball pair last game, and Pretorius and Hangargekar could stem the runs after the powerplay if the spinners aren’t effective. After PBKS were cruising at 109 for three at the ten-over mark, CSK restricted them to just 72 runs in the next half. Another medium-pacer in the mix could lift some of the heavily reliance on Dwayne Bravo as well.

3. Time for CSK to look beyond Ambati Rayudu?

Trying to bat deep has not worked for CSK because of the immense pressure on the lower-middle order once the top three have failed. No matter how far down the lineup they bat, the game has already been lost with three-four batters back in the hut within the powerplay. It’s simply impossible for the batters at 5, 6 and 7 to try and make a game of it. He scored 15 from 17 against KKR, and 13 from 21 against PBKS, eating up deliveries and exerting huge pressure on the batters after him. The only time Rayudu looked close to his usual incautious, free-swinging self was when he hit 27 from 20 against LSG. But comparatively, his strike rate of 135 could’ve been better. The strike-rates of the other batters from that 200-plus innings who scored over 15 runs were 185 (Uthappa), 159 (Moeen), 163 (Dube), 188 (Jadeja) and 266 (Dhoni). Of course, between Lukcnow’s effortless batting and CSK’s spinless bowling, not even another 20-30 would’ve made any difference. CSK would do well to promote their form batters – remarkably few, it is true, only Dube and MS Dhoni, to an extent – up ahead of Rayudu.