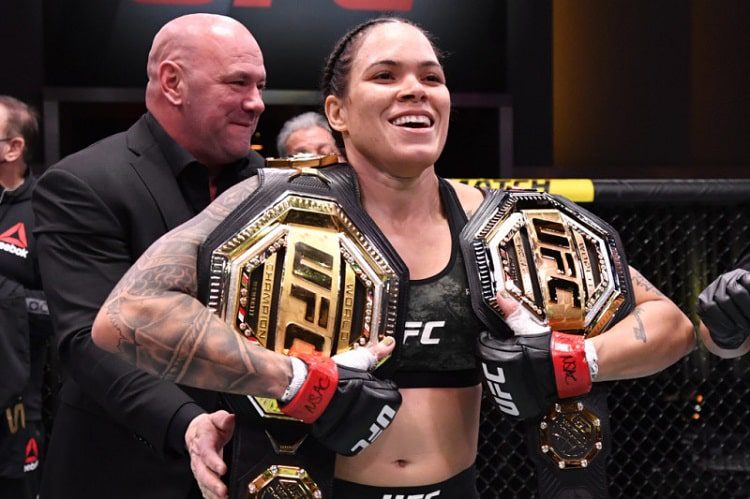 Womens UFC is becoming popular now a days. Many women are coming up and taking part in this combat sport. There are four weight categories in the Ultimate Fighting Championship for women which are Bantamweight, Featherweight, Flyweight and Strawweight.

Aspen Kohl Ladd is an American professional mixed martial artist born on 1 March 1995 in California, United States. An American professional MMA fighter, he entered the Ultimate Fighting Championship bantamweight category and became a professor when he began his MMA career at Invicta FC in 2015. She started her MMA career in 2015 and competes in the Bantamweight Category.

Jéssica Fernanda da Costa Andrad is a Brazilian professional mixed martial artist born on 25 September 1991 in Parana, Brazil. As a Brazilian professional MMA fighter, she’s in the Ultimate Fighting Championship flyweight category, is also the UFC Women’s Strawweight Champion, and is considered one of the top 10 active Ultimate Fighting Championship fighters. She competes in the Flyweight Division and was the former Strawweight Champion. Jessica started her MMA career in 2011 and was ranked number one Flyweight ranking in October 2020.

Zhang Weili is a Chinese mixed martial artist born on 13 August 1989 in Hebei, China. Chinese MMA fighters are currently competing in the UFC’s straw weight category, but she was a former UFC female straw weight champion. Zhang fights in the Strawweight division and is the first ever Chinese and East Asian champion in UFC history. She is a former UFC Women’s Strawweight World Champion. Zhang started her fighting career in 2013.

Valentina Anatolievna Shevchenko is a Kyrgyzstani-Peruvian professional mixed martial artist born on 7 March 1988 in Bishkek, Kyrgyzstan. Although the Bullet was a talented professional Muay Thai fighter, she is now in the top 10 active female UFC fighters and is an undisputed flyweight champion. Valentina started MMA in 2003 and currently fights in the Flyweight division. She is the current UFC Women’s Flyweight Champion.

Amanda Lourenço Nunes is a Brazilian Mixed Martial Artist born on 30 May 1988 in Bahia, Brazil. Amanda is the first and only fighter in UFC history to defend two titles while actively holding them. As a UFC female bantamweight and featherweight champion, she became the first woman to become a UFC two-weight champion. She competes in the Bantamweight and Featherweight Division. She is widely regarded as the greatest women’s Mix Martial Artist of all time. She is active in MMA since 2008.