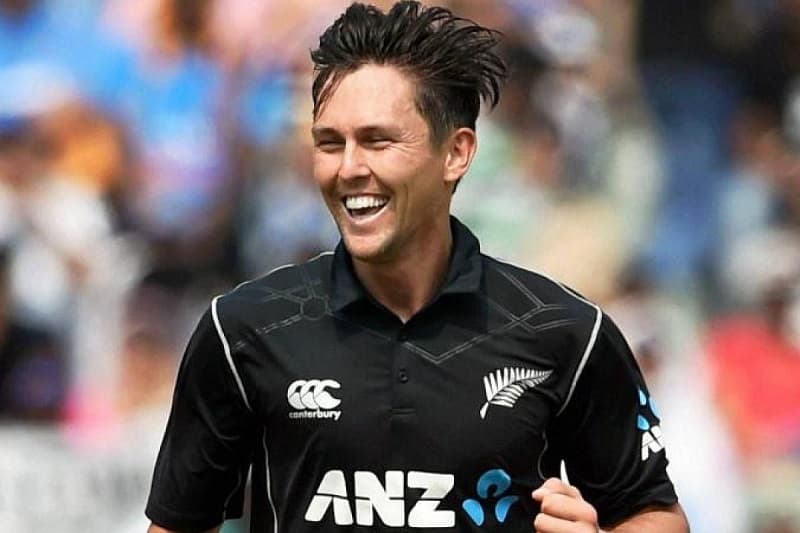 Trent Alexander Boult was born on 22 July 1989 in Rotorua, New Zealand. He is a New Zealand International Cricketer who plays for Northern Districts in Domestic Cricket and as a pacer for New Zealand. Check Trent Boult Net Worth 2021/22, Salary, Central Contract, Personal Life All you need to Know.

He plays for the Mumbai Indians in the Indian premier league. He is a Left-arm fast-medium bowler who bats Right Handed.

Trent Boults Net Worth as of 2021/22 is INR 21 Crore. His main source of income is playing cricket.

Trent Boult plays for Mumbai Indians and they pay a whopping salary of INR 3.20 crores to this Kiwi Pacer. The New Zealand team will give a Salary of $ 450,000 to its pacer.

Trent Boult has been given the Central Contract by the New Zealand Cricket and Boult will get a salary of $450,000.

In June 2016, Boult announced his engagement with Gert Smith, and later in August 2017, the couple got married in a private ceremony. Their wedding took place at Kauri Bay Boomrock. They have 2 children and his family residence is in Mt. Maunganui, New Zealand.

In the 2015 Cricket World Cup, Boult was New Zealand’s Highest Wicket Taker. He got a maiden call for the Indian Premier League from the SunRisers Hyderabad and he was bought at a price of $600,000.

In 2017, he was later bought by the Kolkata Knight Riders for INR 5 Crores. Then from 2018-19, he played for the Delhi Capitals. He was then Traded to the Mumbai Indians and there he played a very crucial role in winning the trophy in the 2020 edition. He was the man of the match in the finals and the Cred power player of the season. He was the third-highest wicket-taker after Kagiso Rabada and Jasprit Bumrah with 25 wickets.

In the 2011-12 season, Bolt made his Test debut against Australia in Hobart where New Zealand were the Winners. He took 4 wickets in that match. He took 19 wickets in 5 tests against England with delivering his best test match innings bowling figures of 6/68 at Eden Park. Boult became the First New Zealand bowler to take 5 wickets to haul in a day-night Test during the Trans Tasman Trophy 2025-16 series in Australia.

In 2015, he was named both in the World Test XI and ODI XI by the ICC. He was named World ODI XI by the ICC in 2017. He won the Sir Richard Hadlee Medal for his performance in the 2017-18 season. In 2018, Boult produced his best figures in Test cricket, taking 6/32 in the First Test against England in Auckland.