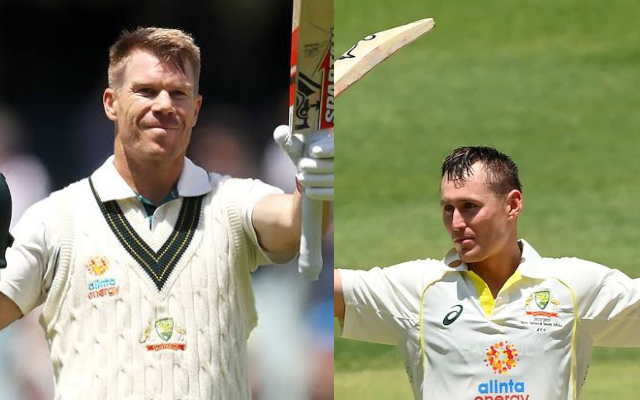 While everyone was busy getting ready for Australia’s impending tour of India, World No. 1 test batsman and notable No. 3 for Australia, Marnus Labuschagne, let out a humorous anecdote from the dressing room. Particularly, he led Australia in batting average during the Border-Gavaskar Test Series in 2020-21.

Labuschagne discussed the private side of fellow Australian and opener David Warner in an interview with the Grade Cricketer podcast. Similarly, he warned the young Australian players in a humorous but harsh tone not to sit in his seat in the locker room.

Labuschagne claims that when the aspiring Australian all-rounder Cameron Green sought to usurp David Warner’s position by hoarding Warner’s cricket equipment while Warner was overseas, Warner wasted no time in disposing of the items. Furthermore, the Australian headliner didn’t apologize for his behaviour.

The world number 1 batter recalled the incident and said, “Try and avoid David Warner’s spot. I have seen about three people who have tried to sit on his spot and I have seen him have zero care. The bags, and the equipments get launched. Cameron Green tried to sit there the other day and put his bag there. When Cameron Green came back, his bag was 10 meters that way (on the other side), upside down. He just sent it, bang, see ya mate.”

Marnus Labuschagne, one of the current greats of the Australian batting lineup, didn’t hold back in his criticism of Australia’s batting stalwart, Steven Smith. He couldn’t help but say “Smudge” when asked which batsman’s response after losing his wicket is the funniest.

When it comes to previous series performances in Australia, the Australian has not been able to repeat his phenomenal form. He has only scored one fifty or more in the past three tests played against South Africa. Labuschagne had a 36.33 average and a high score of 79. His strike rate of 48.23 was also a cause for worry.

Whether or not Marnus Labuschagne can use his batting blitzkrieg to help Australia’s chances of reaching the WTC final remains to be seen. While India’s team hopes to maintain its recent success and get closer to the WTC final by defeating Bangladesh. On February 9th, Nagpur will play host to the Border-Gavaskar trophy’s first game.

“The ODI domination starts here”, Twitter reacts as India becomes the first ever team to win by 300+ runs in ODI
“I find it very strange that there are so many taboos”, Ravichandran Ashwin makes his feelings clear about Rohit Sharma taking back Shami’s appeal to run-out Dasun Shanaka