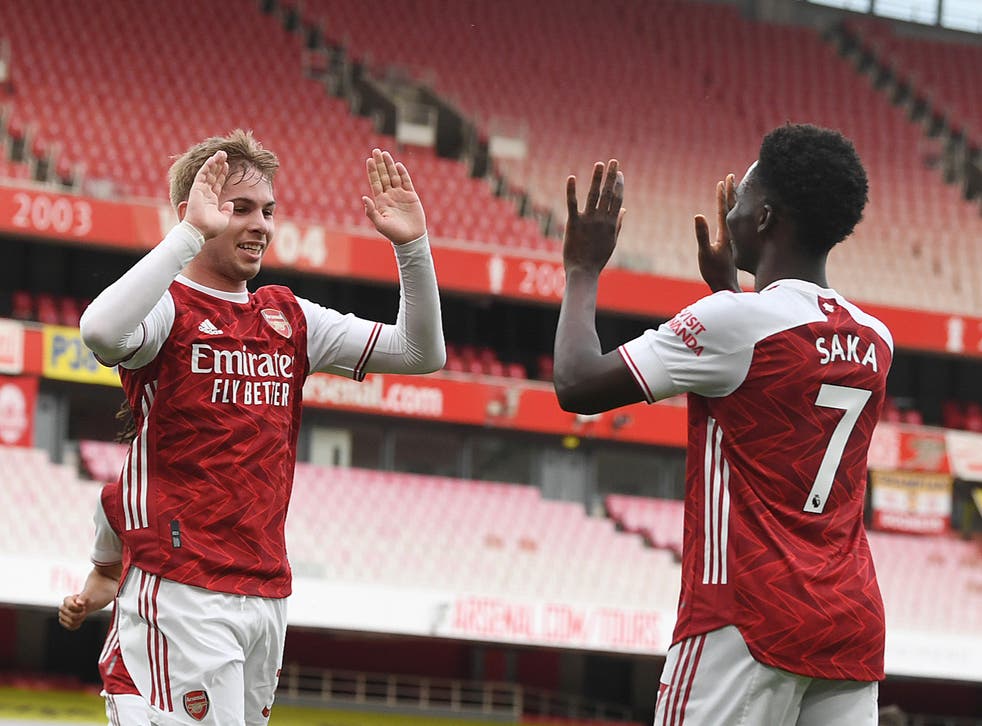 Bukayo Saka slaying the hammers: Midweek Premier League action saw Arsenal returning to the top four after a long time as Emile Smith-Rowe and Gabriel Martinelli struck in the second half to send a soaring West Ham to the cleaners.

Bukayo Saka was at the helm of destruction laid by the Gunners at home as his first tug at a goal-scoring shy came in when he challenged Masauku and skinned him with an outrageous nutmeg to lay the ball in the path of Tomiyasu who, in turn, fed Lacazette to squander away an opportunity.

Saka was once again at the door of West Ham that saw him playing a one-two with Xhaka with the latter bundling his effort into a scrimmage of West Ham defenders. Just at the edge of the half-time, Arsenal could have gone ahead but Fabianksi pulled off a stunning save to deny Lacazette’s low effort.

Arsenal drew first blood within minutes of the game’s resumption as Lacazette picked up a surging Martinelli from the deep and the latter latched onto a beautiful through to slam it emphatically in the back of the net.

Things easily could have been wrapped up around the 66th minute when Lacazette was being upended by a sliding Coufal only for the latter to be given a red card and all of this madness unfolded inside the box. Sadly, for the Gunners, Lacazette couldn’t get his name from the scoresheet even from the penalty.

Saka could have doubled Arsenal’s cushion as Martinelli sent a whipping cross for a scampering Saka only for the latter to be denied by a resolute Diop.

The English midfielder engineered the ball for the second goal as Saka blasted into an almost empty West Ham third to lay off for Emile Smith-Rowe who kept his signature composure to seal the win for Arsenal.

Arsenal surpassed West Ham to enter the top four with an absolutely dominant display that saw them rattling the visitors. Twitter was ablaze with praises for a young Bukayo Saka who was adjudged as the man of the match and Emile Smith-Rowe who has been equally scintillating in his efforts.