‘My ex always wanted to see an international match in a stadium, the day has arrived in Guwahati’-Twitter reacts after a random snake interrupts India vs South Africa second T20I 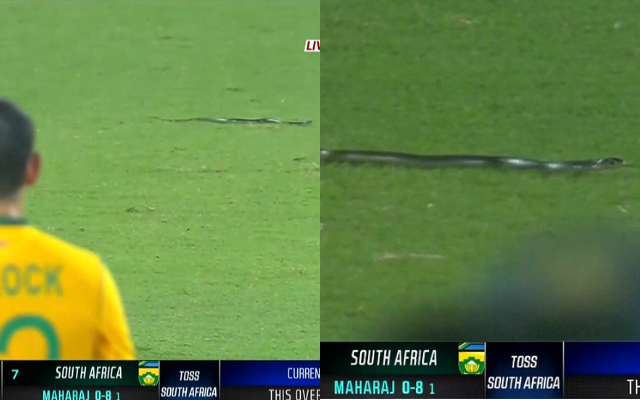 South Africa lost the T20I opener at the hands of India at Greenfield International Stadium, Thiruvananthapuram. India got the better of Proteas by 8 wickets to take a 1-0 lead in the series.

Meanwhile, the second T20I between Proteas and India is being held at Barsapara Cricket Stadium, Guwahati. It is a must-win game for the visitors in order to remain in contention for the series.

On the other side of the coin, Rohit Sharma and Co would give it all in order to win the series. Proteas skipper, Temba Bavuma won the toss and invited the hosts to bat first.

“Just want to come out, play some good cricket and entertain the crowd. We have never beaten these guys here and it’s gonna take a lot of effort from everyone to do that,” said Rohit after the toss

India got off to a spectacular start in the form of Rohit Sharma and KL Rahul. The duo took the opposition’s bowling attack to the cleaners with fearless batting approach.

After the completion of six overs, an unexpected visitor arrived in Guwahati stadium, which took the cricket fraternity by surprise and it was a random snake that entered the turf.

The camera man captured the entire scene. The video clip of the same went viral on the internet. Meanwhile, fans couldn’t stop commenting on it as they came up with hilarious reactions on social media.

Dhoni on the pitch, why?

Whose ex is this ?

My ex was going on an adventure today but I never knew that she is going to Guwhati to watch this SA vs Ind match like this. 😱