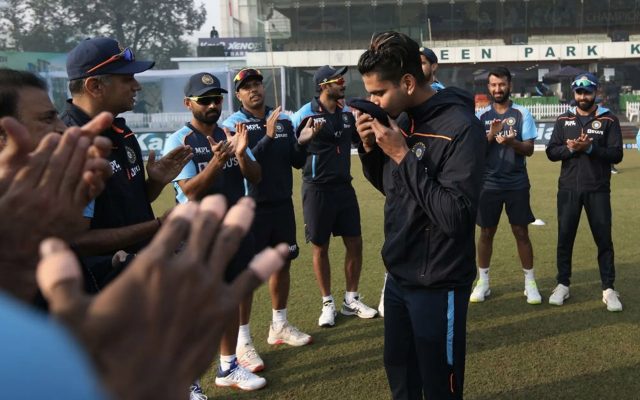 It was a decent day for India as they recovered from a sudden collapse in the middle to come back strongly in the game and pile up immense pressure on the visitors as debutant Shreyas Iyer and Ravindra Jadeja stitched together a 113-runs stand to save the blushes for the hosts.

India was off to a flying start as Shubman Gill dictated proceedings for the Indians. Despite Mayank Agarwal falling to a miscued stroke, Pujara and Gill carried on with the overhaul.

Gill was an absolute treat for the eyes as he attacked the Kiwi bowlers and was successful in obliterating his home curse. However, the second session of the day made India slip terribly as they lost Gill early.

The scalp of Gill opened the floodgates for the blood-sniffing Kiwis as Cheteshwar Puajara and Ajinkya Rahane departed in quick succession. However, much to the surprise of a towering Jamieson and a decent Southee, debutant Shreyas Iyer threw a spanner in their plans.

A look at the bedazzling brilliance posted by Shreyas Iyer

Ever since his arrival to the crease, he was as smooth as ever and played the best-looking shots that a middle-order batsman dreams of.

Using his feet perfectly against the spinners and bringing his impeccable timing and those turnstile wrists to the fore, he displayed sheer brilliance.

He got the perfect support from one of the finest all-rounders of the world, Ravindra Jadeja. Jadeja played his natural game as he comfortably traded the bad balls to the ropes while being highly aggressive in dealing with Southee and Jamieson.

With India’s recent middle-order collapses, especially with Pujara and Rahane failing on multiple occasions, Iyer was touted as someone who could plug the gap with panache.

His stroke-playing was impeccable and his decision-making ability was on the money. He stayed unbeaten at the end of the day for a fine 75 from 136 balls as he hammered 7 fours and 2 sixes.

Jadeja brought out his signature sword celebration as he reached his half-century from 100 balls and will be resuming from where he left tomorrow morning. The duo’s resilient stand helped India to stitch 258 runs for the loss of 4 wickets at the end of day 1.

Twitter was at an absolute loss of words, witnessing Shreyas Iyer in action. They heaped countless praises on the debutant, even comparing him to Rahul Dravid at times.