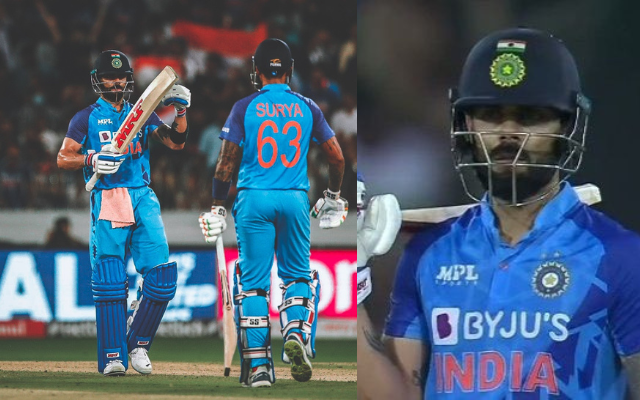 The second T20I between India and South Africa is currently being staged at Barsapara Cricket Stadium, Guwahati. Earlier, India drew first blood in the series by beating Proteas in the first T20I at Greenfield International Stadium, Thiruvananthapuram.

“Just want to come out, play some good cricket and entertain the crowd. We have never beaten these guys here and it’s gonna take a lot of effort from everyone to do that,” said skipper Rohit after the toss.

India got off to a rollicking start, thanks to Lokesh Rahul and Rohit Sharma. The duo added 96 runs for the opening wicket before Rohit fell prey to Keshav Maharaj’s bowling.

Rohit departed after scoring 43 off 37 balls where he struck 7 boundaries and a six. On the other hand, KL Rahul scored 57 off 28 balls including 5 boundaries and 4 sixes.

Suryakumar Yadav who has been in the form of his life has played yet another magnificent knock against Proteas in the second T20I.

The right-handed batter scored a blazing fifty. India’s flamboyant cricketer scored 61 off 22 balls at a strike-rate of 277.27. However, he was run out by combined efforts of Temba Bavuma and Anrich Nortje.

18 ball fifty for Suryakumar Yadav, this is ridiculous batting. pic.twitter.com/TH9pk0sw3m

Their hands get powerless in big Tournaments

‘My ex always wanted to see an international match in a stadium, the day has arrived in Guwahati’-Twitter reacts after a random snake interrupts India vs South Africa second T20I
‘No-one gonna tell how selfless was kohli’-Twitter reacts after Virat Kohli asks Dinesh Karthik to continue the carnage without giving him strike for his 50