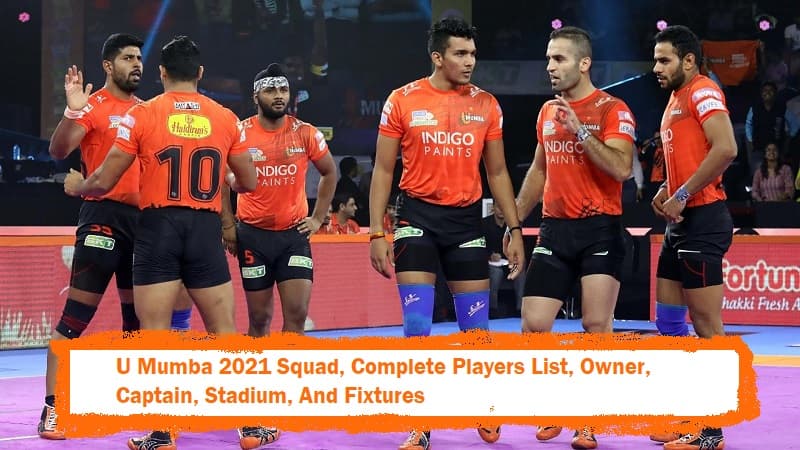 Kabaddi is a sport that is played in rural parts of India. Later, in 2014 it was launched at a professional level named as Pro Kabaddi League. Check U Mumba Team 2021 Players List, Owner, Captain, Stadium, Fixtures.

U Mumba is one of the franchise teams of the Pro Kabaddi League. The team was founded in the same year of the inaugural season of PKL, 2014. The team is based in Mumbai, Maharashtra. U Mumba is considered the most dominating team in PKL. So check out other details like U Mumba 2021 Squad, U Mumba retained players 2021, Owner, Captain, Stadium, And Fixtures.

U Mumba was formed in the year 2014, since its inaugural season it has been referred to as the dominating team. The teams consist of players who are not only strong physically but mentally also. they have a sharp sense of attack and presence of mind. Here is the entire list of players and the positions they will be playing at.

U Mumba lived up to the tag of the best team in PKL history and made their third successive PKL. Under the guidance of a good coach, Sanjeev Kumar Baliyan. The captain of the team for PKL 2021 is Fazel Atrachali, who is a defender in, left corner. Fazel Atrachali is one of only two players with multiple Best Defender awards. The team is owned by Unilazer Ventures Pvt. Ltd owned by Ronnie Screwvala.

U Mumba 2021 Stadium And Fixtures

The Sardar Vallabhbhai Patel Indoor Stadium is a home ground for the team U Mumba. It is an indoor sports arena, in Mumbai, Maharashtra. The facility seats 5,000 people. Established in 1957 and the foundation, the facility is administered by the National Sports Club of India.

U Mumba Team Stats over the 7 Seasons

U Mumba has had very interesting seasons, The team has topped its gaming strategies over the years. The total number of Games played is 131 and the overall matches won are 81. Which is more than Bengaluru Bulls and Patna Pirates. Take a look at the entire table and check out the progress.