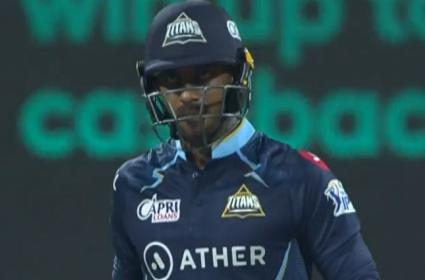 Vijay Shankar has had another poor showing for the Gujurat Titans, this time against the Chennai Super Kings.He fell to Sri Lankan spinner Maheesh Theekshana in the second over of the innings for a two-ball duck. His wicket left GT reeling at 2 for 2 in pursuit of 170.

Shankar was purchased by the Titans for 1.4 crores, and has had an awful time of it in IPL 2022. In the three games he appeared in before the CSK encounter, he managed two single digit scores, 4(6) against the Lucknow Super Giants and 2(7) against Rajasthan Royals.  Perhaps his worst innings was the 13 off 20 balls against Delhi Capitals, scored at a strike-rate of 65 until Kuldeep Yadav finally put him out of his misery.

So far, Shankar has bowled only nine balls in the tournament. On the first occassion, he was called up to complete 4-over quota of Varun Aaron who left the field with an injury and the 14 runs he conceded were a heavy setback for GT. Still, the other bowlers rallied and GT triumphed. His second bowling spell came against RR, where he had to complete the three balls left of Hardik Pandya’s quota.

Vijay Shankar's only contribution to cricket is helping make a legend out of Dinesh Karthik in the Nidahas Trophy final.#IPL2022

He's a much better batter than this, but hasn't done justice

Can someone please tel me why Vijay Shankar plays ahead of Sai Sudharsan ??? #GT

When you regret getting caught by Vijay Shankar more than missing a 50#CSKvsGT #Rayudu #Jadeja pic.twitter.com/QtHeuxt3N1

Divided by religions, united by the confusion that how Vijay Shankar played 2019 World Cup