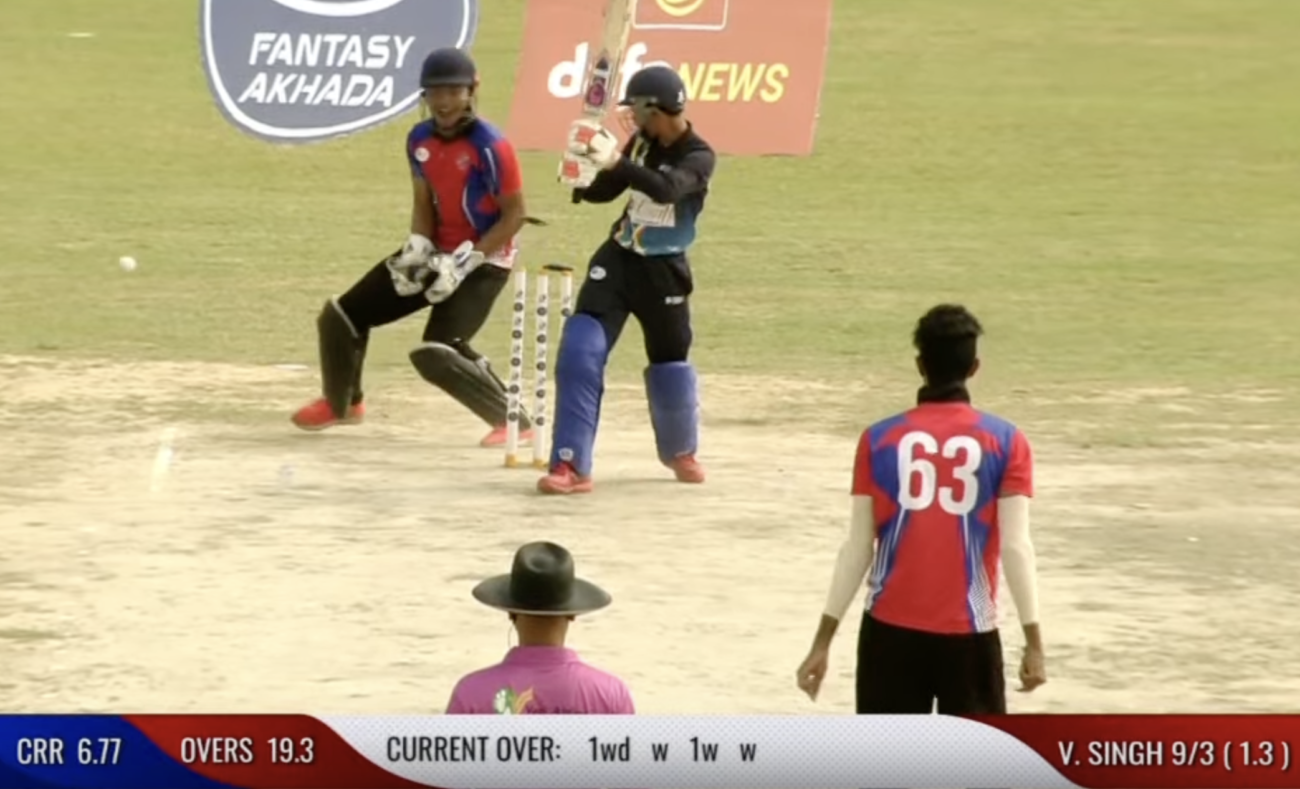 Virandeep Singh had a day to remember as six wickets fell in six balls during a club match in Siddharthanagar. It was a calamitous outing for Push Sports Delhi-XI against Malaysia Club XI, in the Nepal Pro Club Championship 2022. The left-arm spinner took five wickets across six balls, and one batter was run out, completing a rare instance of six wickets falling in every legal delivery of the over.

You can watch the remarkable six-wicket over at the link below.

Virandeep  bowled the 20th over of PSD’s innings, and routed them, reducing them from 130 for 3  to 132 for 9 in the space of six balls. Mrigank Pathak, batting on 39 was caught off the first ball of the over. Ishan Pandey was run out next ball out after scoring 19 off 15 balls. The next four batters were removed off successive deliveries, each departing for a golden duck. PSD succumbed to 132 for 9 in their 20 overs.

Anindo Naharay and Vishesh Saroha were both bowled off the third and fourth deliveries. Virandeep dismissed Jatin Singhal with a catch off his own bowling, and bowled Sparsh off the final ball of the over.

Virandeep opened the batting for MC-XI, scoring 33 from 19 balls before he was bowled by Saroha, one of his victims from that remarkable over.

A few of other instances of six wickets falling in an over are known, all occurring in club matches, never yet in international cricket. Harshit Seth, an U-19 UAE left arm spinner born in Delhi, took six wickets in a club match in Eden Gardens ground in Dubai, part of the Karwan Global Twenty20 League, conducted by Ajman Cricket Council. Aled Carey, a club cricketer from Australia also managed the same feat during a Ballarat Cricket Association game  in Victoria. His first wicket was caught at slip, followed by a caught-behind, an LBW and three consecutive clean bowls thereafter.

Three instances in IPL where R Ashwin has been ahead of the curve
WATCH: Mehidy Hasan hit by ball after fielding blunder