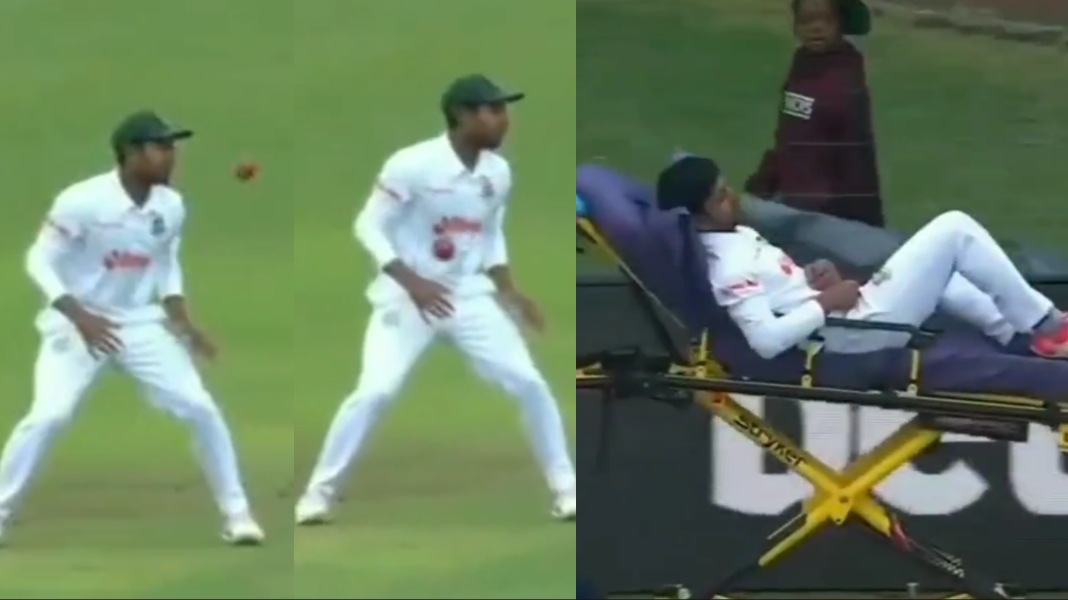 Mehidy Hasan’s fielding gaff in the second Test between Bangladesh and South Africa has turned him into the Internet’s latest joke. Bowling all-rounder Hasan missed what should have been a routine catch, and the ball landed smack in the center of his midriff. There was an initial injury scare after he was wheeled off in a stretcher, but returned to the field shortly after.

Ebadot Hossain bowled a low full delivery to opener Sarel Erwee in the second ball of South Africa’s innings. The batter cut it straight to gully where Hasan was fielding, and Hasan missed the trajectory of the ball entirely, with is eyes fixed at a spot on his left. He appeared to be looking in a completely different direction from where the ball was heading, possibly because it was hit from the direction of the stands. The ball, which was hit hard and traveling fast off that bat, appeared to hit him in his sternum.

Hasan immediately crumpled to the ground, doubling over in pain. A stretcher arrived and he was immediately taken off the field to receive treatment. Subsquent visuals showed he had a visible bruise on his torso. But soon he was seen back up on his feet, walking at the edge of the boundary ropes and preparing to return to play.

Hasan re-entered the field before the start of the the fifth over, to applause from the crowd and a warm reception from his teammates. Yasir Ali shook his hand, and SA skipper Dean Elgar looked relieved as well, pumping his fists as Hasan walked back. Hasan resumed bowling later on, taking the wickets of Temba Bavuma and Kyle Verreynne.

SA declared their innings at 176 for 6 on day three of the second Test at St George’s Park, Port Elizabeth, setting the oppposition a target of 411 to win. But Bangladesh put on another dismal fourth-innings show, collapsing for 80, no better than their 53-all-out from the first test at Durban which they lost by 220 runs. They batting for hardly an hour on the fourth day. All in all, this tour is one the Tigers will want to forget as soon as possible. Bangaldesh lost by 332 runs, and South Africa clinched the series 2-0.