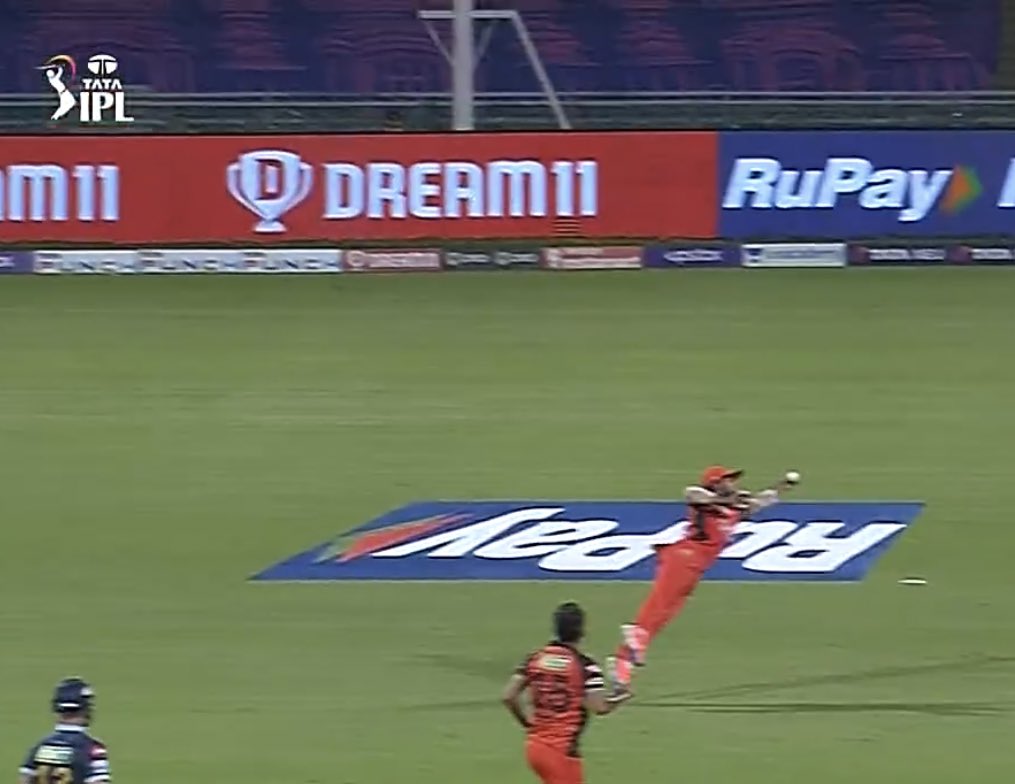 Sunrisers Hyderabad batter Rahul Tripathi took a blinder of a catch to dismiss Shubman Gill in their fixture against Gujurat Titans on Monday. In the third over of GT’s innings, Bhuvneshwar Kumar bowled a full ball outside off, and Gill lofted the ball for his usual trademark drive. It was a shot that deserved four, but it was not to be.

Tripathi, fielding at cover leapt to his left and plucked the ball out of the air with one hand. Gill had smacked it so hard that Tripathi had less than a second to react, but his instinctive grab was flawless, and in-form Gill had to depart after scoring 7 from 9.

Bhuvaneshwar Kumar bowled an uncommonly terrible first over, giving away 17 runs. Still, he had only himself to blame – 12 runs came from extras and only five off the bat, four of those from Matthew Wade’s leading edge that could’ve been a wicket on any other day. He bowled three wides, two of which were huge leg-side blunders that missed the keeper and ran away for four.

But when Bhuvi did manage to get his line right, both batters struggled to pick him. So it made sense that captain Kane chose to trust his most consistent seamer to come back from that difficult opening over, and Bhuvi more than redeemed himself.

Shubman Gill has been in unbelievable form for GT this tournament, averaging 62 with 180 runs from only three innings. He has looked an entirely different batter at the top of the order for GT than he did for KKR. After a duck in his fist game agains LSG, he has since scored 84from 46 against DC, and racked up an outstanding 96 against PBKS, his highest ever score in the IPL.

GT have had a dream start to their IPL, and with three wins out of threee games have been easily the most successful team so far of this IPL. SRH looked to be carrying from last season in their first two games, but mustered some moment against poor CSK to clinch their first two points of the season.

WATCH: Mehidy Hasan hit by ball after fielding blunder
‘Not a bad captain because he lost his cool’- Graeme Swann talks about Hardik Pandya