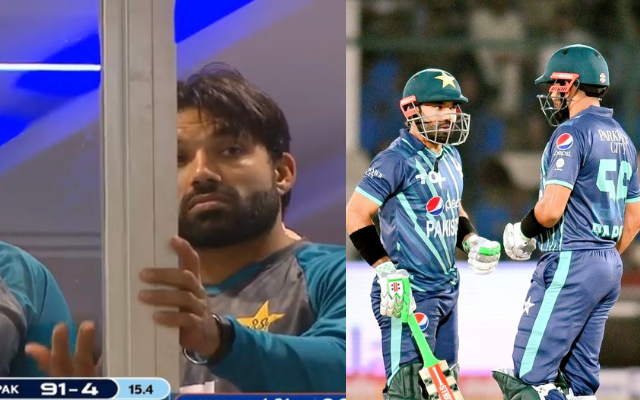 England’s tour of Pakistan consists of seven T20Is. So far, the first four games of the long T20I series have been done and dusted. England won the first T20I by 6 wickets whereas Pakistan won the second game by 10 wickets.

The visitors made a comeback in the third T20I by beating Pakistan by 63 runs to take a 2-1 lead in the series. On the other hand, the hosts made a brilliant fightback in the fourth T20I as they clinched the thriller by 3 runs.

Both teams won two matches each. The first four games took place in Karachi. Meanwhile, the next three games of the series will be held at Lahore. The fifth T20I is currently being held at Gaddafi Stadium, Lahore.

Meanwhile, England skipper Moeen Ali won the toss and invited Pakistan to bat first. Mohammad Rizwan who has been in red-hot form of his life scored 63 off 46 balls with the help of 2 fours and 3 sixes to his name.

Apart from him, all other batters failed to contribute to the team. Had it not been for Rizwan’s efforts at the top, it would have been a different story altogether for the hosts.

Pakistan were bowled out for 145 runs in 19 overs. On the contrary, Mark Wood was the pick of the bowlers for England. He took 3 wickets to his name whereas David Willey and Sam Curran took 2 wickets each. Pakistan do have bowlers in their arsenal to defend the target. It will be quite interesting to see what’s in store for the fans.

We always come up with ZERO plans against short pitch bowling. Pathetic stuff.#PakvsEng2022

If Pakistan wins I will propose her.

Agreed that he needs to be bit more aggresive but a partner is necessary. Someone has to step up if 🇵🇰 loses Babar early.#PakistanCricket #PakvsEng #UKsePK

Muhammad Rizwan only consistent player in the team.
Legend Rizwan
Only Real GOAT 🐐
King Rizwan 👑
One and Only @iMRizwanPak#PakvsEng #MuhammadRizwan pic.twitter.com/tVdC2pKSMl

If England bat with 1 hand and 1 eye closed they will win this game. #PAKvsEng #UKSePK

Over to bowlers again#PakistanCricket #PakvsEng

‘Just rolled over the whole SA batting line up with ease’-Twitter reacts as India need 107 to win the first T20i against South Africa
“You always want a left-arm seamer in your line-up”, KL Rahul all praise about Arshdeep Singh