‘Went for 48 in the previous match, today came back with a five wicket haul’ – Twitter erupts over Jasprit Bumrah maiden five-for 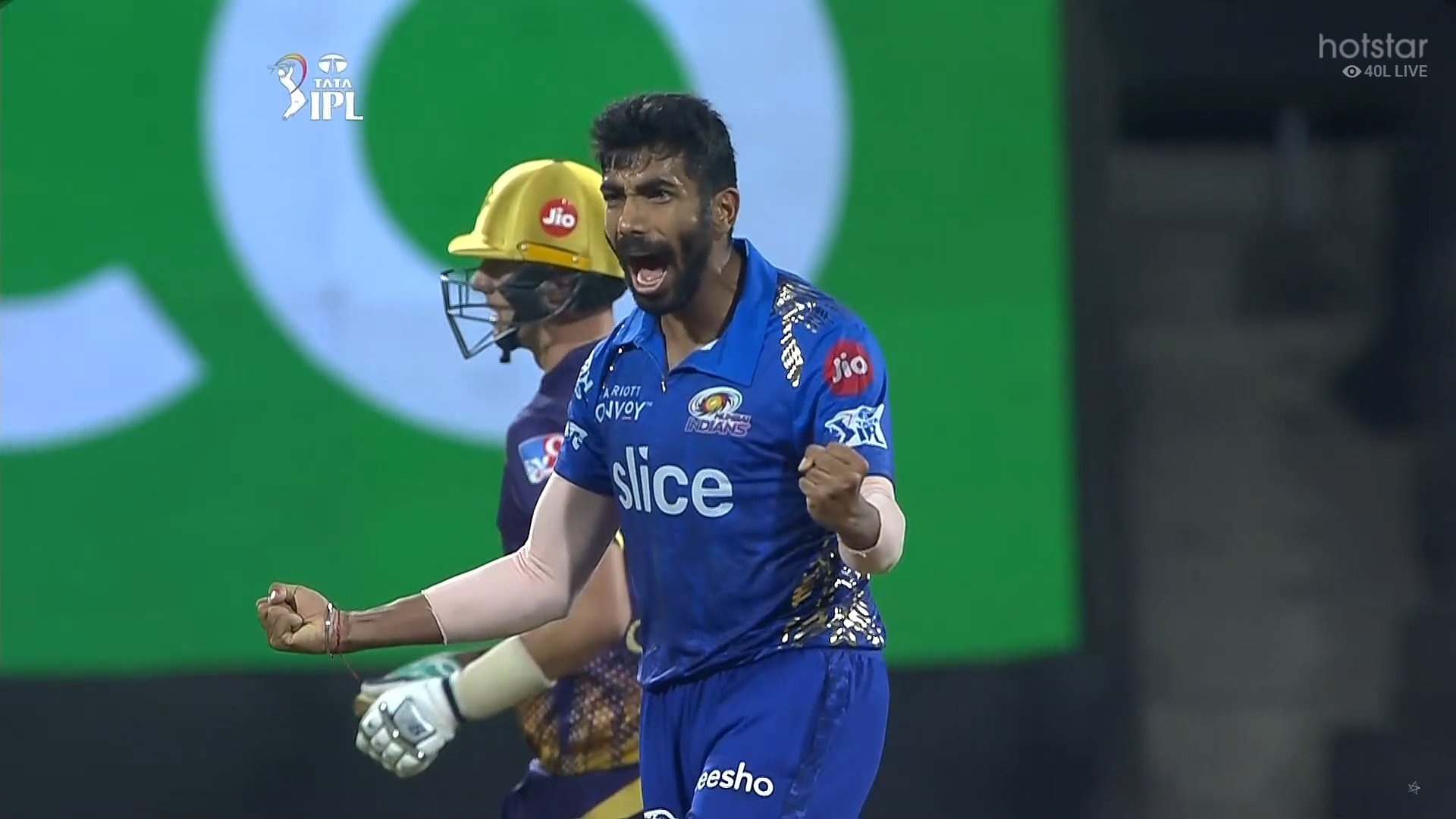 Jasprit Bumrah was on fire today for the Mumbai Indians in their fixture against Kolkata Knight RIders on Moday. The pacer ripped through KKR’s middle order, taking his maiden IPL five-for while conceding just 10 runs at an economy rate of 2.5. Three of those five wickets came in a single, brilliant wicket maiden over.

Bumrah was introduced during the powerplay, and his first over went for just five runs. Those were half the runs he eventually conceded during the course of the game, which ironically came off the bat of Ajinkya Rahane, who struggled to find timing. KKR were batting at 136-3 when he came back in the 15th over, and were batting at a healthy run-rate of 9.7 despite MI not allowing them to form a substantial partnership after the 60-run stand between the openers.

Bumrah then proceeded to knock the stuffing out of them in the space of the next few overs. The dangerman Andre Russell was his first victim of the match. The big Trinidadian was beaten for pace by a length ball outside off, but still tried to send it out of the park and was caught by Pollard at long-on. three balls later, Nitish Rana was done in by a speedy bouncer. The batter looked to get out of the way but ended up swinging his bat at it in the last minute, and the DRS review confirmed that he’d nicked it before it landed in the hands of the keeper. In one over, Bumrah conceded only four runs and removed KKR’s most dangerous finisher as well as the set batter Rana, who’d done well to score q quickfire 43 off 26 balls.

Returning in the 18th over, Bumrah then picked up the pivotal wickets of KKR’s last recognised batters – Sheldon Jackson, as well Pat Cummins and Sunil Narine in successive balls. Jackson’s disappointing IPL continues after he failed again to make a double-digit score, and he tried to pull a short ball that made it only as far as the diving Daniel Sams at midwicket. Another short ball took care of Pat Cummins, who couldn’t connect and this time it was Tilak Varma who took an excellent catch running in from square leg.

Bumrah’s deliveries only became faster and more menacing as the his over progressed. Sunil Narine was no match for him, and was completely beaten for pace by a back-of-the-length delivery that was fired in around off-stump. He got a leading edge high off the bat and it ballooned in the air, and BUmrah himself collected the ball in his follow-through.

You just saw why Bumrah is so special. What an over!

If you haven't watched this from Bumrah today, you have missed something. By some distance the best spell I have seen this #IPL. Just brute pace and amazing skill. When he bowls like this, he is unmatched.

Hard lengths & Yorker MASTERCLASS from Bumrah, haven’t seen death bowling that good in quite a while

Most dot balls bowled in death overs of IPL innings:

Bumrah is just building up in the end of this season for Archer-Bumrah pair next year.

I am still visualising every single ball of that Jasprit Bumrah spell in my head.

Pity poor Nitish Rana. He is way too underqualified to deal with that rip snorter! 🤌🤌

Conceded 48 runs in the previous match, came back with a 5 wicket haul and a wicket maiden in the 18th over in today's match. What a comeback by Jasprit Bumrah🔥 #IPL2022 pic.twitter.com/Hdv76GQeDN