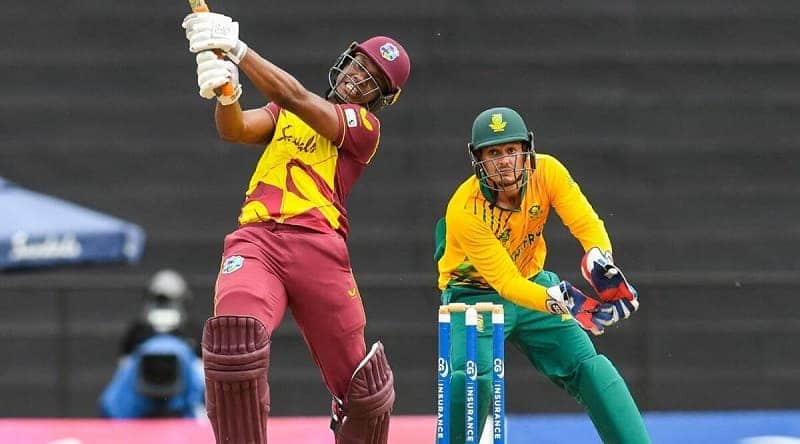 West Indies vs South Africa have planned to play their second test match T20I on 27th June 2021 at National Cricket Stadium, St George’s, Grenada on Sunday. South Africa beat West Indies 2-0 in the first T20I in the test series. Both teams are in the middle of the ICC rankings driving into the series. The West Indies are in the tenth position whereas South Africa is sixth in the ICC rankings. The Windies are in front in terms of winning the T20 series by other teams. They have a better understanding of the situation because of playing at home. Check Here Details West Indies Vs South Africa 2nd T20 Preview, Prediction, Squad, When and Where to Watch Live Streaming?

It is a somewhat high-scoring game today with the batsmen expecting some help from the surface. The bowlers will also get the chance when the pitch slows down as the match progress. In middle overs, a wicket in hand will have the chance of winning the game. Both teams will be pursuing to win the toss. A total of 170 will be good for this venue.

South Africa’s experienced batsmen failed to deliver and West Indies won the 1st T20I match. The skilled batsmen like Heinrich Klaasen and David Miller break down to deliver. West Indies are undoubtedly the favorite once. They could lead 2-0 with a win in the 2nd T20I match on Sunday.

Where to watch the live streaming of the 2nd T20I West Indies vs South Africa match?

In India, the 2nd T20I West Indies vs South Africa match will be telecasted in OTT platform Fan code. Dream Sports is the original company of the Fan code who has got the media rights from the West Indies board in April. The app is available on both android and ios devices.

The local timing of all the five test matches is 2 pm which means in India it will start the late at night. Here is the full schedule of the test series of West Indies vs South Africa :