“What’s the use? TN out of competition”, N Jagadeesan sets the record of scoring most runs in a single edition of Vijay Hazare Trophy 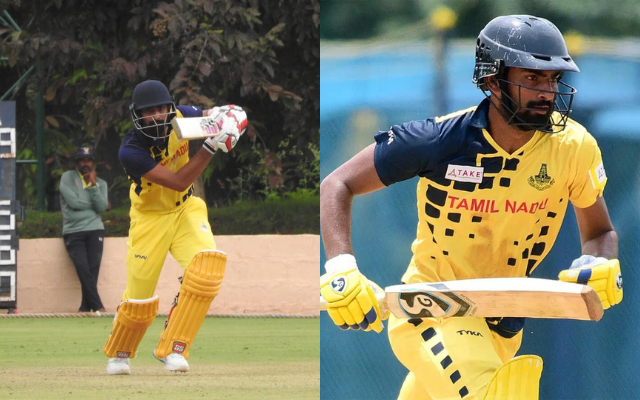 Tamil Nadu cricketer N Jagadeesan swung his blade with brute force when it mattered the most and piled up plenty of runs for himself and for the team in the ongoing edition of the Vijay Hazare Trophy 2022 tournament.

Coming out to bat as an opener, the wicketkeeper-batsman did cause enough carnage to the opposition teams. Notably, he succeeded in taking the bowling attack to the cleaners, more often than not in the 50-over format.

Apart from scoring runs at the rate of knots, he also went on to score a truckload of runs for himself. In the process, he scored more runs than any other batsman in the domestic competition.

It is worth mentioning here that N Jagadeesan set a record of scoring most runs in a single edition of Vijay Hazare Trophy. Having played eight games, he has aggregated as much as 830 runs at a mind-boggling batting average of 125.37.

Moreover, he also maintained a pretty impressive batting average of 138.33. Overall, he slammed as many as five centuries to his name, which is quite a record in this format. Since he was technically sound with the bat, he was able to bring the best out of himself.

He registered his individual best score of 277 against Arunachal Pradesh and has remained unbeaten on two occasions. On top of that, he has hit a flurry of 73 boundaries and 31 hits over the fence.

For the unversed, Chennai Super Kings purchased the services of N Jagadeesan for his base price of INR 20 lakh at the IPL 2022 mega auction in Bengaluru. However, he played only two games for the franchise, scoring 40 runs to his name.

Moreover, he was also released by the four-time IPL champions, Chennai Super Kings ahead of the IPL 2023 auction in Kochi. Given his recent form, franchises would be trying their best to sign him at the mini auction on December 23.

CSK is the best franchise in spoiling youngsters.

From setting records after records, TamilNadu was this season's one of the favourites! Their batsmen failed when it matter the most! QFs!

What's the use?TN out of competition 🤣🤣it's important to play well in knock out matches.

Fraud failed in knockout deserved to be on bench

“Now that’s extraordinary, he has a big future ahead”, Twitter reacts as Ruturaj Gaikwad hits 7 sixes in an over off Shiva Singh in 49th over to complete double century
“I know VVS Laxman has got a lot on his plate”, Murali Kartik explains Indian coach’s decision to drop Sanju Samson