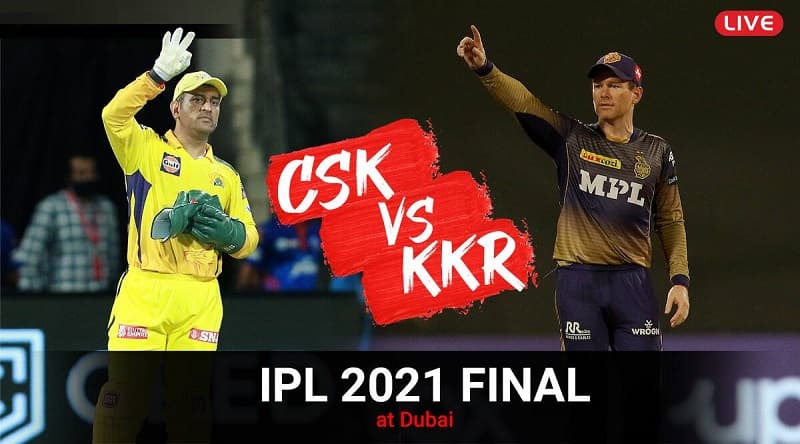 We all were waiting for this moment from the start of the 14th season of the IPL. The finals are here, one match, one win to decide that who is going to lift the trophy for 2021 IPL. Chennai will be facing the Kolkata Knight Riders in the final showdown of the season. Check Where to Watch CSK vs KKR Final Live Cricket Streaming IPL 2021?.

The 60th and the final match will be played between Dhoni-led Chennai Super Kings and Morgan-led Kolkata Knight Riders. The two sides will meet at 7:30 PM at the Dubai International Stadium in Dubai. Watch Today IPL Final Match Live Streaming In Hindi.

In foreign countries, Sky Sports will telecast the matches in the United Kingdom and New Zealand, Willow TV in the United States, Fox Cricket in Australia, beIN Sports in the Middle East, and SuperSport in South Africa.

How to Watch Live on Mobile?

The matches can be live-streamed on Disney Plus Hotstar app. This is Over a top platform of Star Sports Network. You can find the app on the play store and app store. Jio TV will also be live streaming the matches.

The pitch in Dubai International Stadium is a batting-friendly pitch with an average total of 165-170. The pitch helps seamers in the second half of the match with extra bounce. Teams chasing on this ground have won more matches than the teams defending the target. The team will hope to win the toss and would like to chase the targets.

Both the teams have faced each other 26 times before. The Chennai Super Kings have dominated the encounter with 17 wins whereas Kolkata Knight Riders have only 9 wins on their side.