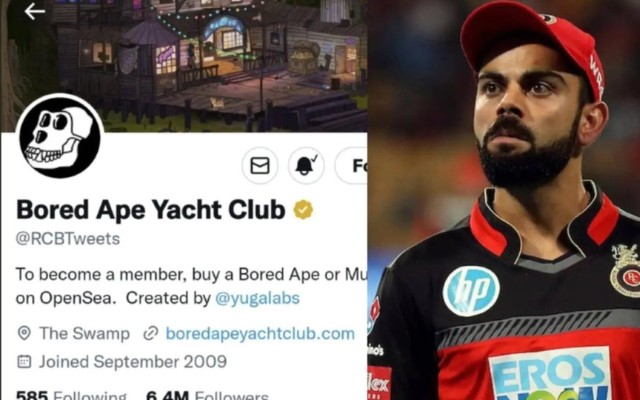 Royal Challengers Bangalore led by Faf du Plessis showed promising signs in the previous edition of the Indian Premier League. They not only qualified for the playoffs but also knocked Lucknow Super Giants out of the competition in the Eliminator clash.

RCB ended up losing to Rajasthan Royals in the second qualifier, which also meant the end of the road for them in the fifteenth edition of the Indian Premier League. They will be looking forward to doing well in the forthcoming season of the IPL.

It will be quite interesting to see how they come up with a perfect plan and strategy to make a bid for the title. They do have all the tools and ingredients to compete for the title. They are one of the very few franchises that haven’t won the title in the competition despite making it to the finals on three occasions.

Meanwhile, in the latest development, RCB’s official Twitter handle has been hacked on January 21, Saturday. Yes, you read it right! RCB’s Twitter account has been hacked, which surprised many in the cricket fraternity.

Perhaps, the hackers tried various methods to hack the RCB’s Twitter handle. They would have managed to bypass the account with two-factor authentication and information regarding the same has not been known yet. The unknown people hacked the account and changed the display picture at first.

After that, they also changed the profile name from Royal Challengers Bangalore to ‘Bored Ape Yacht Club’. The fans of the RCB franchise came across NFT-related tweets from the Twitter handle and it was when they came to know that the account has been hacked.

The hackers went on to retweet some other NFT-related users. Meanwhile, the official statement of the RCB stated that they lost access to the account beyond their control despite taking the security measures advised by Twitter. The RCB team stated that they are constantly working with the technical and support team of Twitter to sort out the issue as soon as possible.